Kieran Cleary, aged 16 (17/10/02) from Bradford, has today (Friday September 20) been sentenced to five years imprisonment for terrorism and explosive offences. He was found guilty in May 2019.

On sentencing, the Judge lifted restrictions which had previously protected Cleary’s identity.

Officers from Counter Terrorism Policing North East arrested Cleary in August 2018. He was arrested under terrorism legislation and later charged. Following a trial at Leeds Crown Court he was found guilty of one offence contrary to Section 4 (1) of the Explosives Substance Act – making an explosive substance; and three offences contrary to Section 58 of the Terrorism Act 2000 – possessing a record of a kind likely to be useful to a person committing or preparing an act of Terrorism.

The teenager first came to the notice of police in 2016 and a referral to Prevent was made in 2017. Despite the hard work of Prevent officers and other safeguarding professionals over an extended period, Cleary’s behaviour continued to be of serious concern and last summer the decision was made to arrest him.

When officers searched his home they found, in his bedroom, a device constructed in line with instructions around the manufacture of a CO2 bomb. Thankfully, the device was not fully completed and was not classed as viable.

Analysis of Cleary’s online activity showed extensive research around bomb-making, searches about attacks on Muslims, and a wide range of videos showing death, mutilation and torture; clearly showing an escalating interest in violence and extreme ideology.

Detective Chief Superintendent Martin Snowden is the Head of Counter Terrorism Policing North East; “This is a disturbing case of a teenager who developed an alarming interest in extremist ideology, violence, firearms and explosives. He has spent considerable time alone on the internet and has intentionally accessed the ‘dark web’.

“His fascination with violence and death is particularly concerning given his age and vulnerability.  Young people can be susceptible to the negative influences online and we urge people to have the confidence to report worrying attitudes or behaviour.

“Our message remains the same that we will always try to intervene as early as possible to support those at risk of radicalisation.

“Despite extensive attempts to steer this boy away from the path of criminality, due to the progression of his behaviour, he was arrested and charged with serious offences.

“His online searches combined with the manufacture of an explosive device had the potential to put the safety of others at risk and could not go unprosecuted.

“If you have any information about suspicious or terrorist activity, then please ACT and call police in confidence on 0800 789 321 or via www.gov.uk/ACT.” 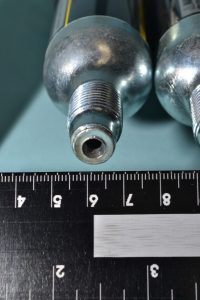