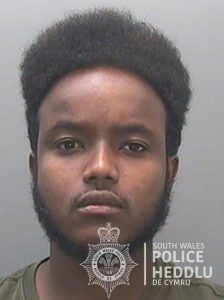 During the opening stages of the trial the Court heard that both offences were discovered when the defendant’s phone was seized and interrogated.

Detective Superintendent Jim Hall of the Wales Extremism and Counter terrorism Unit, (WECTU) said:  “Zakaria Afey has been convicted at the Old Bailey of two offences contrary to the Terrorism Act.

“Such was the strength of the evidence that once Afey realised there was going to be no other conclusion to the trial he changed his plea to guilty.

“Afey was arrested and charged following a detailed investigation into his activities by WECTU which was assisted by staff from South Wales Police.

“Cardiff is an extremely safe city. The community in Cardiff have repeatedly rejected the extreme views of individuals calmly and with dignity. Their support is of great value and should not be underestimated.

“Welsh police forces continue to work closely with their partners and communities to reassure local people and protect the public.

“Extremism and radicalisation in all their forms are something that we continue to be constantly vigilant about.

“Nobody is better placed to detect something that is out of place in their communities than the people living in them. To effectively combat the terrorism threat the police, businesses, government and the general public need to work together.”

Every year thousands of reports from the public help police tackle the terrorist threat. If you see or hear something unusual or suspicious trust your instincts and ACT by reporting it in confidence at gov.uk/ACT.  Reporting won’t ruin lives, but it could save them. Action Counters Terrorism.

Remember, in an emergency,  always dial 999.