Communities Defeat Terrorism – and with the enduring terrorist threat, it is now more important than ever that everyone plays their part in tackling terrorism. Individual actions could save lives.

Counter Terrorism Policing is re-launching our award-winning ‘Communities Defeat Terrorism’ cinema advertising campaign. The campaign will run for 7 weeks from 6 March 2020 until 26 April 2020.

The three terror attacks in the space of 10 weeks, the most recent being in Streatham in February, are stark reminders of the need for the public to remain vigilant and ACT if they see suspicious activity.

The public play an instrumental role in helping us defeat terrorism and we are again inviting partners and stakeholders to promote the campaign on a local level to reinforce the message Communities Defeat Terrorism.

Thanks to your support, last year’s campaign achieved widespread engagement and impact.

Like the 2019 campaign, this year’s campaign is aimed at a cinema audience, and designed to run during the trailers. The 60-second film will feature bespoke, localised calls to action in an effort to fully resonate with the viewers. The film is largely unchanged apart from the localised call to action moved from the end of the film to the beginning. Using cinema to deliver the campaign ensures the message is received with fewer distractions, more impact and to more hard to reach audiences, including younger people.

The campaign launches on 6 March and will run for seven weeks. The film will be played in 152 cinemas in ten regions across England, Wales and Scotland during the trailers encouraging film-goers to ‘look again’ at suspicious activity and if they are concerned, report it.

Interested in our campaign plan? Take a look at a summary of our OASIS plan.

New Videos, Images & Graphics are available to support the campaign. Please share the content with your digital teams.

Below are suggested posts. We encourage you to share these on your channels natively, tailor it to your audiences and mix between video and graphics. If you require the content in different formats contact nctphq.comms@met.police.uk

Unfortunately, life has no rewind button ⏪

Reporting it won’t ruin lives, but it might save them. If it doesn’t feel right, ACT.

Look again 👀 …it could save lives.

We’re supporting @terrorismpolice in working to keep the UK safe from terrorism.

Reporting suspicious activity won’t ruin lives, but it might save them

The campaign hashtag is #ActionCountersTerrorism

You can adapt our intranet news article for use within your organisation.

You can download the following graphics to use on your building’s display screens and website by clicking the images below:

These clips can be used on your display screens: 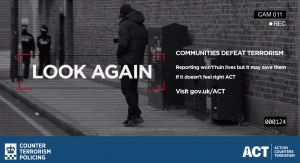 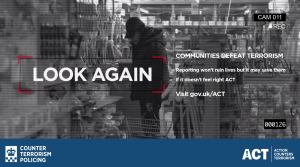 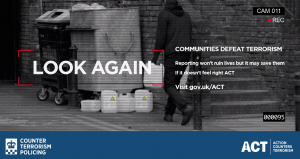 There have been multiple terrorist attacks in the UK resulting in a change of rhythm and tempo in police investigations. We must continue to educate the public about the different attack planning methods beyond ‘the suspicious package’ and encouraging them to help us stop attacks by reporting suspicious activity.

Thanks to your support, during the March 2018 campaign, we saw intelligence from the public nearly double. We ran a four week online video campaign, which was supported by our partners across Government, local authorities, police forces, businesses and charities.

You can also use the following posters and leaflets to display inside your organisation’s building for general use. They have been provided in PDF and InDesign formats should you need to resize the image or add your organisation’s logo. If you require InDesign files please contact nctphq.comms@met.police.uk

How You Can Help

The logos below can be used for promoting the campaign.

We have also provided guidelines with helpful information on how to use the ACT logo and branding. You can download the ACT-Brand-Identity-Guidelines.