Convicted terrorist jailed for breaching conditions of his release 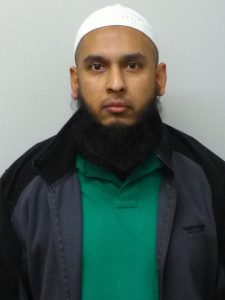 A man previously convicted of terrorism offences who breached his notification requirements has been jailed after an investigation by the Met’s Counter Terrorism Command.

Shah Rahman, 39 (15.11.82) of east London, was arrested by counter terrorism officers on 22 March 2022 after they found that he had breached legislation that had imposed certain requirements on him, following his release from prison.

He was recalled to prison. While in custody, further investigations into his activity were carried out by the Counter Terrorism Command who identified two further breaches of his restrictions.

He was sentenced on Friday, 10 June to eight months’ imprisonment, after admitting to the three breaches of Part 4 Notification Order requirements, under the Counter-Terrorism Act 2008.

Detective Chief Superintendent Dominic Murphy, of the Met’s Counter Terrorism Command said: “Rahman, like all offenders convicted of terrorism offences, are subject to strict conditions when they are released from prison.

“These conditions are designed to help minimise the risk of reoffending, and we work hard with our partners to manage these offenders in order to keep the public safe. When breaches are identified, we do not hesitate to investigate and put them before the courts.”

Rahman was originally jailed in 2012 following an investigation led by the West Midland Counter Terrorism Unit (WMCTU), where he was convicted of conspiracy to cause explosions and engaging in conduct in preparation for acts of terrorism. He was also convicted of being in possession of items useful to a person committing or preparing an act of terrorism.

As part of his sentence, he was made subject to a Part 4 Notification Order for 30 years after his release, meaning he had to notify police of certain changes to circumstances, such as use of financial accounts, email accounts and vehicles.

Communities defeat terrorism, and information from the public is vital to counter terrorism investigations.

If you see or hear something unusual or suspicious and think someone may be engaging in terrorist activity, trust your instincts and act by reporting it in confidence at gov.uk/ACT. Always dial 999 or in an emergency.