Four people, who advocated racist violence and the manufacture and possession of weapons, have been convicted of terrorism offences after they were exposed by an undercover police officer. 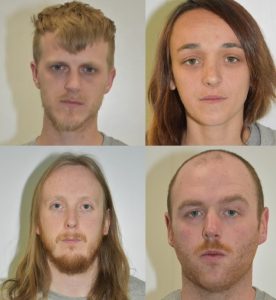 Daniel Wright, Liam Hall, Stacey Salmon and Samuel Whibley were found guilty of a combined total of eighteen offences today (Tuesday, March 29) following a trial at Sheffield Crown Court. The date for sentencing is yet to be fixed.

During the eleven-week trial, the jury heard how the defendants came together in a private online chat group to share extreme right-wing views and propaganda, influence and indoctrinate others and endorse the use of violence to further their cause.

The group discussed ways to evade detection by police, mistakenly believing they could share information about sourcing chemicals and the manufacture of firearms without drawing the attention of the authorities. Despite vetting members of their channel, encouraging them to encrypt materials and destroy evidence, the four were identified and arrested by officers from Counter Terrorism Policing North East in May last year.

Unknown to the defendants, an undercover officer had not only infiltrated their Telegram chat but had also established himself as a trusted contact within private messages. He was able to monitor their activity and plans to bypass UK gun legislation by creating a 3D printed firearm.

Following their arrest, a partially constructed 3D printed firearm was recovered from the home of Hall and Salmon in Keighley, West Yorkshire. Examination by a specialist confirmed that despite being incomplete, the weapon could have proved lethal if fully assembled.

Other weapons were also recovered from the homes of the defendants, in addition to chemicals, practical guides for making explosives and extreme right-wing texts and videos.

Detective Chief Superintendent Martin Snowden is the Head of Counter Terrorism Policing North East. He said: “The vitriolic hatred expressed by these defendants went far beyond an intolerance of others. They are terrorists, with a deeply entrenched extreme right-wing mindset and a desire to act on those beliefs.

“While the group had no clear target at the time of their arrest, they pushed relentlessly for violent action in pursuit of their objectives.

“Despite taking precautions to protect themselves and their activities, they were unaware they were being monitored. None of their security measures were enough to maintain their anonymity, or ultimately prevent their arrest and prosecution.

“This case clearly demonstrates that those attempting to illegally obtain firearms, or promote violence in support of their prejudice, are never beyond our reach.”