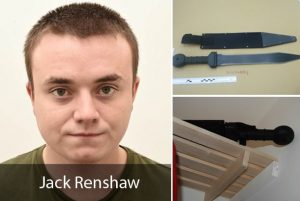 A Lancashire man who threatened to kill a police officer and an MP has been jailed.

On the second day of a four-week trial at the Old Bailey in July 2018, 23-year-old Jack Renshaw from Skelmersdale shocked jurors by pleading guilty to threatening to kill a police officer who was investigating him for child sex offences.

Part of his admission included buying a gladius sword – described on the internet as ’19 inches of unprecedented piercing and slashing power’ – to carry out the attack on not only the detective but also a local MP.

The child sex offences were uncovered after his phone was seized in 2016 – the investigation that led to him being convicted for stirring up racial hatred in Blackpool and Yorkshire. He claimed the officer had fabricated the evidence in an attempt to stitch him up and justified his fatal plan as revenge.

A key witness told the court how Renshaw – who was described as riled because officers had searched a property connected to him – told of his plans at a pub in Warrington in July 2017.

An analysis of his internet history, which included searches of how long it would take someone to die from a wound to the jugular artery and research into his political target, proved his intent but, what secured his detention was the discovery of the very same 19-inch sword that was stashed in an airing cupboard.

His plan – it was revealed in court – was to hold hostages at a pub or café before demanding to see the officer who was investigating him and kill her on arrival. The events, he’d unrealistically hope would unfold, would then see him being shot dead by officers – or as he described it, ‘suicide by cop’.

Due to reporting restrictions, the sex offences and full details of how he came to be jailed today (Friday 17 May 2019), could not previously be reported on.

As he was sentenced, the judge said Jack Renshaw (03/06/95) of HMP Wakefield was ‘undoubtedly a dangerous offender’.

When being sent down to the cells to serve his life sentence, Renshaw made a Nazi salute.

He will serve a minimum of 20 years before being considered for release.

The sentence comes after he pleaded guilty to engaging in conduct in preparation for a terrorist act and threats to kill.

Detective Superintendent Will Chatterton, Head of Investigations for Counter Terrorism Policing for the North West, said: “This has been a difficult and complex investigation but evidence gathered against him, proved his intent to carry out these vicious and brutal killings.

“Renshaw has now been branded a terrorist and will forever be remembered as the vile and malicious individual he has admitted to being.

“I cannot even begin to understand the anxiety and upset this has caused his victims, people who were simply carrying out the duties of their jobs but this case is a key example that we cannot do this alone and need the public to help us in our fight against terrorism.

“I’d urge anyone to trust their instincts and report suspicious activity, including any type of extremist behaviour or views to their local police force.

“Thanks to a crucial witness and the dedicated work of counter terrorism officers, we have been able to see him jailed for life.

“Our work against people like this is not over, however. We will continue to root out those who espouse extreme views and plan to carry out atrocities.

“The actions and views of people like this will not be tolerated and with the help of colleagues at agencies, we will bring these people in front of the court of law to be prosecuted.”

Every year thousands of reports from the public help police tackle the terrorist threat. If you see or hear something unusual or suspicious trust your instincts and ACT by reporting it in confidence at gov.uk/ACT. Reporting won’t ruin lives, but it could save them. Action Counters Terrorism.