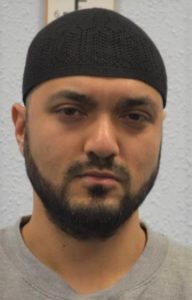 A man found guilty of planning a terrorist attack in London has been sentenced to life imprisonment on Thursday, 9 July at Woolwich Crown Court.

Mohiussunnath Chowdhury, 29 (18.05.91), of Luton, who unwittingly told undercover officers of his plans to launch a terrorist attack, must serve a minimum of 25 years in jail for preparation of acts of terrorism.

He also received sentences of three years’ and seven years’ imprisonment respectively, to run concurrently, for dissemination of a terrorist publication – in relation to a violent terrorist propaganda video he sent the undercover officers – and possession of information useful to terrorism, for having a guide to carrying out terror attacks on his phone.

Following sentencing, Commander Richard Smith, head of the Met’s Counter Terrorism Command, said: “Mohiussunnath Chowdhury posed a very real threat to the lives of innocent people. The investigation team arrested him after gathering enough hard evidence to prove what he was planning to a jury, but before he could cause actual harm. Thanks to Counter Terrorism Police and our partner agencies, Chowdhury is now in prison, rather than seeing his terrorist attack plan through.

“As the lockdown restrictions ease and more public spaces reopen, we need everyone to play their part in keeping London safe, so I urge anyone who sees something suspicious to report it to the police.”

Mohiussunnath Chowdhury’s sister, 25-year-old Sneha Chowdhury, also of Luton, who kept her brother’s plans secret, will be sentenced for failing to disclose information regarding terrorist activity on a date yet to be set.

The pair were convicted on Monday, 10 February, following a six-and-a-half-month counter terrorism investigation.

During the trial, Woolwich Crown Court heard how Mohiussunnath Chowdhury confided his aspirations to men he thought were his friends, but who were in fact brave covert officers deployed as part of a Met Counter Terrorism Command investigation into his activities.

He was also recorded at home telling his sister that he was “doing another attack”, and asking her for help to practice stabbing people – alarming information which Sneha Chowdhury did not report to police.

The Met’s Counter Terrorism Command launched an investigation – supported by the UK security service and Eastern Region Special Operations Unit – into Mohiussunnath Chowdhury’s activities after he began posting disturbing messages online, within days of his acquittal in relation to a separate charge of attack planning.

Counter terrorism detectives identified that soon after being released from remand in December 2018, following his acquittal, Mohiussunnath Chowdhury began posting messages online that demonstrated his extremist mind-set. By the end of January 2019, he had bought a replica gun, which suggested to police that he could be planning a terrorist attack.

Undercover officers were deployed to befriend Mohiussunnath Chowdhury, so they could find out what he was planning and determine how serious his intent was.

An unsuspecting Mohiussunnath Chowdhury not only confessed to officers that he was considering targeting crowded central London tourist attractions and the Pride in London event, but even sought advice on obtaining a real gun from a covert officer using the name ‘Mikael’.

He thought Mikael shared his aspirations to murder innocent people and told the officer that, contrary to his claims of innocence in his previous trial, he had in fact intended to kill soldiers but succeeded in “deceiving” the jury who found him not guilty.

He also told them of a dream he had, that he and a prison inmate carried out an attack on an open-top bus, which police believe was in fact something Chowdhury was planning to do.

Having gathered a wealth of evidence that proved the Chowdhurys’ guilt, detectives arrested the siblings together on 3 July 2019, days before Pride in London.

Detectives witnessed a stark change in Mohiussunnath Chowdhury’s demeanour over the course of his time in police custody. In initial police interviews he was open and talkative with detectives. Police believe he thought he was keeping them distracted while ‘Mikael’ went ahead with an attack.

Days later, when police revealed his ‘friend’ was in fact an undercover officer, he became visibly withdrawn and refused to engage with detectives, answering “no comment” to their questions.

Mohiussunnath Chowdhury was subsequently charged with preparation of acts of terrorism. He was also charged with dissemination of a terrorist publication, in relation to a violent terrorist propaganda video he sent the undercover officers, and possession of information useful to terrorism, for having a guide to carrying out terror attacks on his phone. He was found guilty of all these offences.

Following the sentencing, Detective Superintendent Andy Waldie, head of Counter Terrorism Policing for the Eastern Region Special Operations Unit, said: “We’re really pleased with the sentencing today. Thanks to the hard work of counter terrorism officers in both the Metropolitan Police and the eastern region, a dangerous individual has been prevented from causing significant harm to innocent members of the public.

“We will not tolerate those who seek to cause harm in our communities, and we will continue working with our partners and the counter terrorism network to target, arrest, and disrupt anyone involved in terrorist related activity across the eastern region.

“Communities play a crucial role in defeating terrorism and this case shows how important it is that we all remain vigilant to signs of suspicious behaviour and report concerns immediately to police.”

Anyone who has concerns that someone may be becoming radicalised, or who has concerns about suspicious behaviour, is urged to act by reporting it to police in confidence at http://www.gov.uk/act or by calling 0800 789 321.