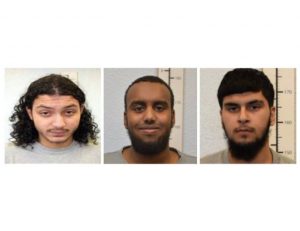 Three men have been convicted of terrorism offences following an investigation by the Met’s Counter Terrorism Command (CTC) with support from Counter Terrorism Police North West (CTPNW) and Eastern Region Special Operations Unit (ERSOU) into attack planning and the dissemination of extremist material.

Mohammed Tahir, 19 (17.06.00) of Peterborough, pleaded guilty to one count of disseminating a terrorist publication, contrary to section 2 of the Terrorism Act (TACT) 2006, at Kingston Crown Court on Friday, 27 November.

The two other men are:

– Muhammed Saeed, 21 (25.03.98) of Manchester, who pleaded guilty on 19 June to five counts of possessing an article in circumstances which give rise to a reasonable suspicion that the possession is for a purpose connected with the commission, preparation or instigation of an act of terrorism, contrary to section 57(1) of the Terrorism Act (TACT) 2000.

– Mohamed Ismail, 23 (11.06.96) of north London, who pleaded guilty on 16 October to two counts of disseminating a terrorist publication, contrary to section 2 of the Terrorism Act (TACT) 2006.

Tahir is now scheduled for a Newton hearing on the basis of his plea in early January 2021. All three have been remanded in custody and will be sentenced on a date in early 2021.

Commander Richard Smith, head of the Met’s Counter Terrorism Command, said: “I am very pleased with today’s result. Three young men have now been convicted of terrorism offences thanks to the vigilance of counter terrorism officers.

“The Met works with other police forces and security services to provide a counter terrorism network throughout the UK to investigate suspicious activity such as that carried out by these three men and to bring offenders to justice.

“However, the Met is also working hard to prevent young people from being drawn towards activity in the first place.

“I urge anyone who is concerned that someone they know is potentially at risk of radicalisation to tell someone and help them take a different path. You can get specialist support at www.actearly.uk – a new dedicated safeguarding website and advice line from the specialists at Counter Terrorism Policing.”

Detective Superintendent Andy Waldie, head of ERSOU’s Counter Terrorism Policing unit, said: “It’s clear that Tahir is a dangerous individual and it is testament to all those involved in the operation that he had little option but to admit the offences.

“This investigation included significant partnership working across the Counter Terrorism Policing network and I’m delighted that the work of our talented teams at ERSOU has contributed to keeping our communities safe.”

Tahir was arrested and charged as above on 30 December 2019 with two other men as part of a planned operation into three individuals across the UK. CTC, ERSOU and CTPNW worked together to make the arrests.

You can report any suspicious behaviour or activity that you think could be terrorist-related, including online graphic or violent extremist material or content that supports, directs or glorifies terrorism by visiting the Action Counters Terrorism (ACT) website or alternatively, by calling police in confidence on 0800 789 321.

If you are worried that someone you know is being radicalised, visit www.actearly.uk or call the national Police Prevent Advice Line on 0800 011 3764, in confidence. Our specially trained Prevent officers will listen carefully to your concerns. You won’t be wasting our time and you won’t ruin lives, but you might save them.