Two men have today (Thursday, November 3) been sentenced at Manchester Crown Court after been found guilty of terrorism offences in July. 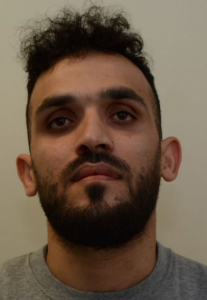 HUSSINI (image to the right) was convicted of four offences contrary to S2 of the Terrorism Act 2006 (Disseminating Terrorist Publications). Both men have been remanded in custody and sentencing will take place at Manchester Crown Court on Friday, September 9th.

AZIZI was arrested in November 2021 after an intelligence led investigation by Counter Terrorism Policing North-East (CTP NE) discovered his online exchange of violent extremist material in support of Daesh. During and after his arrest, AZIZI continued to express his extreme mindset towards officers and failed to comply with a National Security Notice by refusing to provide information that would easily enable access to his mobile phone. Regardless of his refusal, digital experts from CTP NE still managed to access the content of his phone which contained evidence of sharing violent Islamist extremist material with the intention of encouraging terrorism. In addition, the dangerous mindset of AZIZI was discovered as he possessed a video showing how to make a silencer for an automatic rifle.

Detailed examination of his phone data also led to the arrest of HUSSINI in February 2022 after their digital connection became apparent. Using online applications, the pair had shared Islamist extremist propaganda with one another dating as far back as April 2021.   They shared the same harmful extremist mindset and willingness to evade detection by the police with HUSSINI unsuccessfully trying to conceal his digital connection with AZIZI after his arrest.

T/Detective Chief Superintendent Peter Craig is the Head of Counter Terrorism Policing North- East. He said: “Today’s outcome highlights the seriousness of the offences committed by these individuals. The encouragement of terrorism will not be tolerated in our objective to keep our diverse communities safe from terrorism and extremism.

“This case clearly shows the exemplary expertise of our digital investigators who overcame challenges to access a device which identified not only another like-minded individual but also evidence that contradicted the defences of AZIZI and HUSSINI and ultimately led to their convictions”.

“Terrorist groups such as Daesh rely heavily on their propaganda being shared online where it is used to radicalise, encourage support and provoke individuals to carry out attacks abroad and in the UK.

“Tackling extremist material is an essential part of protecting the public and preventing offences that incite or encourage acts of terrorism”.