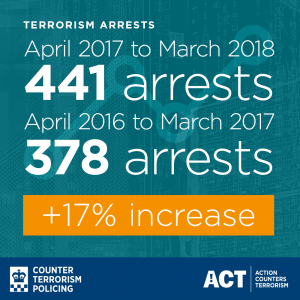 The number of arrests being made by counter terrorism officers in the UK has risen by 17 per cent in the past year.

The arrest figures released by the Home Office, which cover the year up to the end of March 2018, reflect the sustained increase in pace of activity by police across the UK’s Counter Terrorism network. In the year to March 2018, 441 arrests were made, compared to 378 in the preceding year, marking a 17 per cent increase.

Assistant Commissioner Neil Basu, UK Counter Terrorism Policing Lead said: “With the terrorist attacks of 2017 we saw a genuine step-change in momentum. As a result, our operational activity increased to meet the new and emerging threats we now face.

“A year on and our activity continues to be at unprecedented levels; shown, not least, by the fact that, in the past year, working together with the security services we have stopped an average of one terrorist attack every month. Police, together with the security services are determined to make the UK as hostile an environment for terrorists as possible.”

Since the Westminster attack in March 2017, there have been 12 terrorist plots foiled in the UK by police and the UK intelligence community, with a further four extreme right wing attacks also stopped in this period. At any one time, there are around 600 active CT police investigations, involving some 3,000 people who pose the biggest threat.

In addition, the figures released by the Home Office include, for the first time, ‘disruption’ arrests – those whom officers believe may be linked to terrorist activity, but may be arrested for other criminal matters, such as fraud, robbery or drugs offences.

The figures also show the broad spectrum of people being arrested in connection with terrorism investigations in terms of age, gender and ethnicity.

AC Basu added: “We’re taking every possible opportunity to disrupt terrorist activity – be it making arrests for terrorism offences, or for other types of criminality that the individuals or groups are involved in.

“We’ve also seen for some time now that there is no typical profile of a terrorist. The recent conviction of a young girl who, along with her mother and sister, were planning terrorist attacks on the streets of London, is a stark demonstration of the breadth of threat we’re having to deal with.

“But we cannot be successful in combatting terrorism unless we have the help and support of the public. With a busy summer ahead, including the World Cup as well as various other sporting and music events happening across the UK, it’s vital that members of the public remain vigilant in all situations, and if they see or hear anything suspicious, then ACT and report it to police, so that we can take appropriate action.”