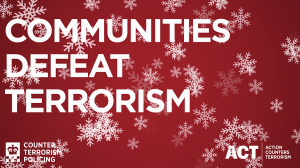 With the festive rush about to get underway, Counter Terrorism Policing is today launching its biggest-ever winter advertising campaign as part of ACT: Action Counters Terrorism.

While there is no known increased threat to busy town and city centres, people flocking to stock up on Christmas gifts will see police working alongside security personnel to encourage everyone to remain vigilant and report anything suspicious.

Experts from Counter Terrorism Policing will be asking retailers and other businesses who operate in crowded places to think about their contingency plans, asking them to draw up a ‘Sixty Second Security’ plan which has the power to improve their reaction to emergencies.

Across the country, security messaging will appear on advertising boards and digital screens around crowded Christmas events and key shopping locations, reminding the public about the crucial role they play in helping to tackle the terrorist threat.

“As people are enjoying the festive season they will see a visible security presence with police patrols and additional security in crowded places.

“I want staff working in crowded places to know who is appointed to make decisions on the shop floor, how to enter and exit a building in an emergency, how to lock down or where to hide if needs be.

“Last year on Oxford Street we saw a fight at a Tube station cause panic when people believed that a terrorist attack had occurred. In the rush to keep themselves safe, some people suffered serious injuries and businesses were severely disrupted.”

We advise the public to remain vigilant and, if they see or hear something suspicious, trust their instincts and report it to police in confidence at gov.uk/ACT or 0800 789 321.