In 2018, six people were jailed for more than 34 years for being members of the extreme right wing neo-Nazi group; National Action.

National Action is a far-right neo-Nazi organisation based in the United Kingdom.

Founded in 2013, the group is secretive, and has rules to prevent members from talking openly about the organisation.

It has been a proscribed organisation in the United Kingdom under the Terrorism Act 2000 since the 16th of December 2016, the first far-right group to be proscribed since World War II.

In March 2017, an undercover investigation by ITV found that its members were still meeting in secret.

A jury at Birmingham Crown Court found two men and a woman guilty after three other men had admitted membership of the group before the trial. 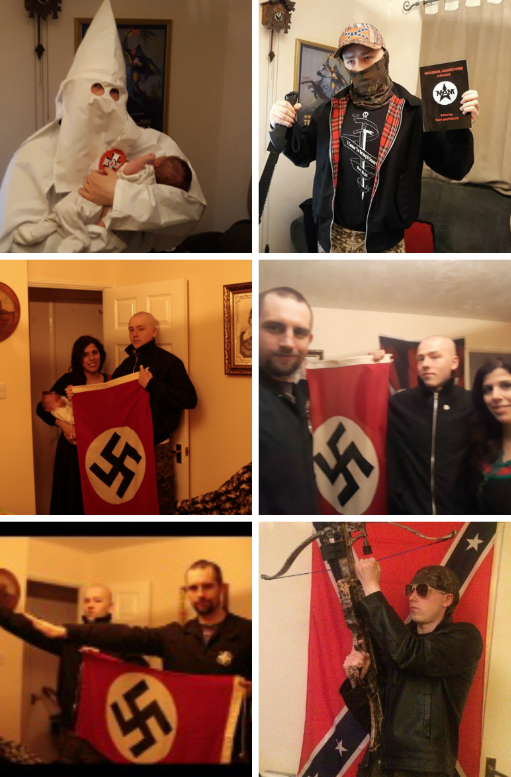 These images were seized during the investigation

Daniel Bogunovic, 27, from Leicester, Adam Thomas, 22, and Claudia Patatas, 33, − both from Oxfordshire − were all found guilty.

Joel Wilmore, 24, from Stockport, Darren Fletcher, 28, from Wolverhampton and Nathan Pryke, 27, from Cambridge, all previously admitted their membership.

Thomas was also found guilty of possessing information of a kind likely to be useful to a person committing or preparing an act of terrorism contrary to Section 58 of Terrorism Act 2000 (possessing bomb making instructions).

Bogunvic was found guilty of inciting racial hatred under Section 18 (1) of the Public Order Act 1986 after National Action branded stickers were found displayed in the grounds of the Aston University complex in July 2016.

Joel Wilmore also pleaded guilty to possessing information of a kind likely to be useful to a person committing or preparing an act of terrorism contrary to Section 58 of Terrorism Act 2000 (possessing bomb making instructions). Darren Fletcher pleaded guilty to five breaches of his criminal anti-social behaviour order.

It was reported, the group used several methods to disguise their contact with each other such as using pseudonyms through closed, encrypted messaging platforms as well as regularly meeting in person to spread their ideology.

“This result is a culmination of two years of painstaking work in the West Midlands and across the country to recognise and understand the threat of National Action.

These individuals were not simply racist fantasists; we now know they were a dangerous, well-structured organisation. Their aim was to spread neo-Nazi ideology by provoking a race war in the UK and they had spent years acquiring the skills to carry this out. They had researched how to make explosives. They had gathered weapons. They had a clear structure to radicalise others. Unchecked they would have inspired violence and spread hatred and fear across the West Midlands.”

Our officers and staff are at the forefront of the UK’s work to confront terrorism, operating around the clock to prevent, disrupt and investigate dangerous extremists – whatever their ideology. We are recruiting and a have range of vacancies from across the UK.

You can report the threat of terrorism online via our online reporting tool.