Emergency services in London test response to a terrorist attack

The Metropolitan Police, along with other emergency services and statutory partners has carried out a major live-play exercise this week to test the joint response to a major terrorist incident 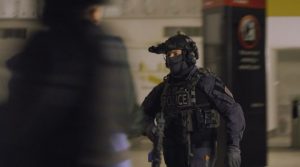 The exercise was not carried out in response to any specific threat or intelligence, but forms part of our regular CT testing and exercising programme.

The exercise scenario involved an improvised explosive device detonating and injuring large numbers of people as they attended a fictional music concert at a stadium venue.

“Whilst the exercise was not designed with any specific threat in mind, sadly, previous attacks such as those we’ve seen in Manchester and Paris show that this kind of scenario at a busy entertainment venue is a real possibility.

“Exercises like this test how our blue-light services respond to this type of incident, ensure the plans we have in place are fit for purpose, and identify where we might improve. It also gives our officers and staff invaluable experience to respond in a live-play scenario under pressure with real sights, sounds and smells, so that they are in the best position to respond effectively should the worst ever happen for real.”

The exercise scenario began on Saturday 26 November, and took place at a disused terminal building at Heathrow airport. The scenario itself was not related to the aviation setting, but the venue had been used for previous counter terrorism exercises and using it for this particular exercise allowed the emergency services the space and control to respond in as realistic way as possible, without causing disruption to the public.

Amongst the specialist police units that were taking part in the exercise were armed officers, explosives ‘EOD’ officers, dogs, and forensic teams. Officers from British Transport Police and City of London Police also took part. They were joined by responders from the London Ambulance Service and London Fire Brigade, who supported the search, rescue, casualty management and recovery responses at the scene.

Day two of the exercise took place on Wednesday 30 November and focused on the strategic coordination between the various agencies involved as the scenario moved from the immediate response phase, to the longer-term recovery phase.

Over the course of the exercise, a number of different functions were tested, including command and control, intelligence, firearms response, communications, and disaster victim identification.

CTSFO talking on a police radio

The exercise is the first major live-play exercise carried out by the Met since Lord Harris published his second report looking at London’s preparedness to respond to a terrorist attack in March 2022. The report identified that significant progress had been made since the initial report in 2016, with further recommendations identified, and which are now subject to consideration and implementation.

“The overall terrorism threat level in the UK remains at ‘substantial’. We know that we cannot afford to let up in our efforts to prevent or thwart terrorist attacks, and equally, to be fully prepared to respond should one happen. I am extremely grateful for the support Heathrow Airport has given us by once again, allowing the use of their building.

“This work is vitally important for all of us, including the public. And the public has a really important role to play by remaining vigilant. So please do get in touch if you see or hear anything that doesn’t feel right. You won’t ruin anybody’s life by doing so, but you could just help save lives.”

Anyone who sees something suspicious should report it to police, in confidence, by 0800 789 321 or in an emergency, dial 999. You can also report concerns online via gov.uk/act