The Head of Counter Terrorism Policing has welcomed the proscription of neo-Nazi group Sonnenkrieg Division (SKD). 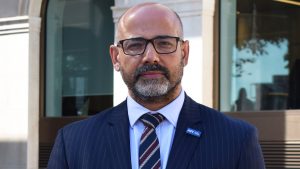 As of Friday 28 February it is an offence to be a member or support Sonnenkrieg Division, as well as National Action off-shoot, System Resistance Network (SRN). Anyone convicted could face up to 10 years in prison and an unlimited fine.

The group becomes the second right wing terrorism organisation to be proscribed in UK since the 1940s, following National Action’s proscription in 2016.

The Head of Counter Terrorism Policing, Assistant Commissioner Neil Basu, said: “Last year I warned that right wing terrorism (RWT) was the fastest growing terror threat in the UK, and today’s proscription is a positive step in the fight against this insidious and hateful ideology.

“The overriding threat to the UK remains from Daesh-inspired groups and individuals, but the threat we face from RWT is very real – proven by the fact that nearly a third of the plots foiled by police and security services since 2017 relate to right wing ideology.

“We have already seen the conviction of two SKD members for plotting to attack the Royal family, and there are countless other examples of the exceptional work that has taken place across our national network to disrupt, dismantle and destroy right wing terrorist groups such as SKD or National Action.

“However, despite our success in this area we are not complacent and when groups like National Action fracture and attempt to rebrand to avoid detection, much like with SRN, you can be sure we are ready to tackle them in whatever new guise they adopt.

“But as I have said repeatedly, we cannot simply hope to arrest our way out of this problem. It requires the whole of society to realise that we all have a part to play in this fight and while my officers might be on the frontline, we cannot succeed without the help and support of the public.
“Groups like SKD spread their poisonous propaganda online and we will take action against anyone who attempts to draw vulnerable people down a path towards extremist and violence. But too often recently we have seen young people in the UK jailed after being lured down that path by what they consume online.

“We don’t want to be in the business of convicting children and young people, but when they become a risk to themselves and others we must take the appropriate action to protect the public.

“We can stop this from happening, but it requires parents, friends and family to help us by sharing their concerns when they suspect someone they know is in danger of being radicalised. It is a difficult thing to do, but we must see it for what it is – action which could potentially save their life and the lives of others.”

If you are concerned that someone you know is potentially at risk of radicalisation, tell someone – and help them take a different path. For help and advice about the risks of radicalisation and to refer your concerns, visit www.ltai.info

To learn more about how you can contribute to the UK’s fight against terrorism visit gov.uk/ACT.