Counter Terrorism Policing are reminding communities of the power of public reporting this Christmas, as they urge vigilance over the coming weeks

With footfall increasing and the World Cup playing out on screens across our towns and cities, people are being asked to play their part and report any suspicious activity. 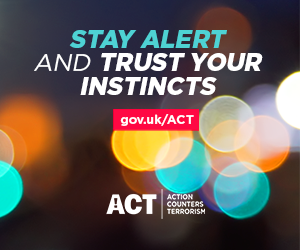 Stay alert and trust your instincts

“Sadly, the threat from terrorism does remain very real, and it is vital that we have the support of the public, alongside our own operations and activity.

“Since 2017, we, along with our partners have disrupted 37 late-stage terrorist plots, and this work by dedicated, specialist officers and staff reaches right across the country.

“At this time of year, we naturally see more people heading out and about and with the World Cup featuring on the festive calendar this year, we really need people to be on the ball themselves.”

Every year, Counter Terrorism Policing receives over 10,000 reports from the public and a fifth of those provide intelligence which is particularly useful to investigators.

Information provided by the public can help progress existing investigations, instigate new ones and ultimately lead to enforcement activity and arrests by officers.

“The power of public reporting should not be underestimated. It is never a waste of time to speak to us, or submit an online report.

“Whether you notice something whilst you’re at work, or out with friends, or simply on your journey home, trust your instincts.

“There is so much to enjoy this Christmas, including England’s continued success in the World Cup, and we want people to get out there and have a brilliant time with the people they love.

“As well as protective security measures, you might notice more police officers than usual in your town and city over the next few weeks, and there may also be resources that you don’t see – they are all there to keep you safe.”

If you see something suspicious, either tell a police officer, report it online via gov.uk/ACT or call the confidential Anti-Terrorist Hotline on 0800 789 321. In an emergency, call 999.