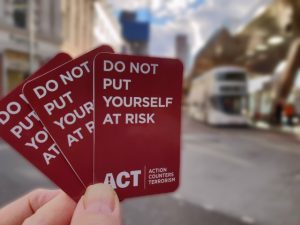 Bus and other heavy vehicle companies are being offered advice to help prevent terror attacks.

The version for HGV operators details how they can help identify and report suspicious behaviour, and what actions to take if there is an attack. The emphasis throughout is for drivers and other workers not to put themselves at risk.

A bespoke aide memoire including specialist security advice is available to download.

The project is being launched today (Tuesday October 30) at the Euro Bus Expo, taking place at the NEC in Birmingham, and is supported by the Department for Transport.

While there is no specific intelligence to suggest bus or other companies are a target, attacks in Europe have seen vehicles hired or hijacked and then driven into pedestrians. In Nice a lorry, and in Barcelona a van, were driven into members of the public resulting in many fatalities and serious injuries.

Last year’s attack in Westminster, which resulted in five deaths and multiple injuries, saw a SUV used as a weapon as well as a knife.

Chief Inspector Anthony Bennett, from Counter Terrorism Policing, says: “We are really keen to work with different industries to encourage everyone working in crowded places to play their part in tackling terrorism.

“We are developing stronger relationships with many different sectors, including transport, as part of a step-change programme that forms part of the government’s overall counter terrorism strategy known as CONTEST.

“One successful collaboration was with football and, although a very different business, we hope some aspects of the work done there can be adapted for staff working for commercial vehicle companies.

“The aim is always not to alarm people but show them how they can be alert to threat, and in being so help reduce the likelihood of an attack.

“If there is an attack, our research shows that people want to be informed and they feel more confident knowing the basic steps to take to help keep themselves and others safe.”

Officers will also be offering exhibitors the chance to sign up to us use a new e-Learning tool that has been produced in partnership with retail giant Marks & Spencer.

Free to register, the package aims to raise awareness of counter terrorism measure among worker is crowded places.

More information about can be found by visiting the National Counter Terrorism Security Office (NaCTSO) website.

Any company wishing to receive artwork for the advice card should contact their local Counter Terrorism Security Adviser. Details on how to do this are also on the NaCTSO site.