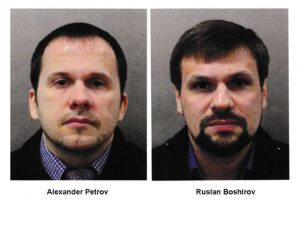 Do you know these men? Did you see them between Friday 2 March and Sunday 4 March?

The Counter Terrorism Policing investigation into the attack in Salisbury and subsequent events in Amesbury has today issued a significant update. Two suspects have been identified and the Crown Prosecution Service have authorised charges.

“Today marks the most significant moment so far in what has been one of the most complex and intensive investigations we have undertaken in Counter Terrorism policing; the charging of two suspects – both Russian nationals – in relation to the attack on Sergei and Yulia Skripal. I would like to thank the Crown Prosecution Service for their independent assessment of the evidence in this case.

This has been a highly complex investigation for UK policing, which would have been impossible without the great staff and abilities of the UK Intelligence Community and the support of the Government.

My thoughts remain with Dawn Sturgess’s family as they come to terms with their loss, the other victims who fell seriously ill after being exposed to a Novichok nerve agent and the people of Salisbury who have shown tremendous resilience throughout.

We said from the start that this investigation would take time as we gathered and assessed all the evidence available to us. Around 250 detectives from across the Counter Terrorism Policing Network have worked on the investigation, brilliantly led by Counter Terrorism Policing South East, and supported by officers from Wiltshire, numerous forces on mutual aid, as well as partners and agencies, ranging from Public Health England to the Defence, Science and Technology Laboratory in Porton Down.

Over the last six months we have meticulously followed the evidence, working closely with specialist forensic teams and scientists, as we have investigated both the attack on Sergei and Yulia Skripal in Salisbury, and the poisoning of Dawn Sturgess and Charlie Rowley. Let me be clear, we have no doubt these two incidents are connected and now form one investigation.

Today’s announcement by the CPS marks the most significant development in this investigation. We now have sufficient evidence to bring charges in relation to the attack on Sergei and Yulia Skripal in Salisbury and domestic and European arrest warrants have been issued for the two suspects. We are also seeking to circulate Interpol Red Notices.

However, our enquiries do not stop here; and today, as well as updating you about the progress of the investigation, I am appealing once more to the public for their help, as we continue to build our evidence in this case.

To recap, Sergei Skripal and his daughter Yulia were found unconscious on a bench in Salisbury city centre at 4.15pm on Sunday, 4 March, after being poisoned by a Novichok nerve agent.

Both Sergei and Yulia spent weeks critically ill in hospital but thankfully are now making a good recovery. Detective Sergeant Nick Bailey, a Wiltshire police officer, was also seriously ill after being exposed to the nerve agent. He continues to make good progress but remains off work. The medical support provided by NHS, Public Health England and expert scientists has been fantastic, particularly given the fact that we have never had to deal with a poisoning by a Novichok nerve agent before in the UK.

Tragically 44-year-old mother of three, Dawn Sturgess died in hospital on Saturday, 8 July. She fell ill on 30 June after being exposed to Novichok and she never regained consciousness. Her partner, 48-year-old Charlie Rowley, was also exposed to the nerve agent and became seriously ill later that day. He received treatment at Salisbury District Hospital over three weeks.

We have now linked the attack on the Skripals and the events in Amesbury which affected Dawn Sturgess and Charlie Rowley. It now forms one investigation. We do not believe Dawn and Charlie were deliberately targeted, but became victims as a result of the recklessness in which such a toxic nerve agent was disposed of. We know that Novichok was applied to the Skripals’ front door in an area that is accessible to the public, which also endangered the lives of members of the public and emergency service responders.

Our rationale for linking the two investigations is primarily based on the following four facts:

Despite the meticulous and painstaking searches, and although unlikely, it is impossible to guarantee that there are no other materials present in the Salisbury area. Therefore we are repeating the advice from Public Health England that people should not pick up items which do not belong to them. We don’t yet know where the suspects disposed of the Novichok they used to attack the door, where Dawn and Charlie got the bottle that poisoned them, or if it is the same bottle used in both poisonings.

As you have heard, today’s charges relate to the first incident involving the Skripals and Nick Bailey. We continue to liaise with the Crown Prosecution Service regarding the poisoning of Dawn and Charlie.

Since March we have received tremendous support from the people of Salisbury and Amesbury and our many partners, which has been invaluable to the investigation team. Today we are releasing further information and a number of images in the hope that the public can assist us further.

On the 14 March the Prime Minister said there is no alternative conclusion other than that the Russian State was culpable for the attempted murder of Mr Skripal and his daughter. We now need to hear from the public.

I am therefore, appealing for anyone who has information about the suspects named by the CPS today as Alexander Petrov and Ruslan Boshirov to contact police. Both suspects are approximately 40 years old, and are Russian nationals who were travelling on Russian passports.

It is likely that they were travelling under aliases and that these are not their real names. We would like to hear from anyone who knows them. We are releasing these photographs of them, from the travel documents they used to enter the country.

We’d also like to hear from anyone who saw them while they were in the UK between Friday, 2 March and Sunday, 4 March. We are particularly interested in establishing as much as possible about their movements during the period 2pm to 4.30pm on Saturday, 3 March, and 11.30am to 2pm on Sunday, 4 March.

If you recognise them, know who they are or saw them please contact police in confidence on 0800 789 321 or email the investigation team Salisbury2018@met.police.uk

A complete list of updates, documents, and presentations related to the Salisbury & Amesbury case can be found on Counter Terrorism Policing’s Salisbury Investigation page.