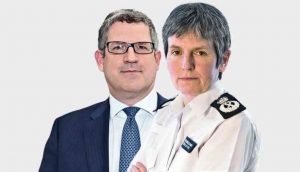 Britain is one of the safest and most prosperous countries in the world. Nonetheless, the complex challenges we and other countries face from terrorism and malign acts by foreign states are all too real. As we saw in Christchurch, attacks can happen at any time and in any place.

With GCHQ, MI6 and other partners, MI5 and the police carry the fundamental responsibility to keep Britain safe from such dangers. Numerous plots have been thwarted but the reality of attacks such as those in Manchester, London and Salisbury drives us to constantly improve. Many decades dealing with a shifting threat have led to advances in our partnership, making it today perhaps the strongest of its kind anywhere in the world.

Our people are drawn from all walks of life and are part of the communities they live in. They work around the clock to stop terrorists and others who mean to cause harm. It hits them hard when attacks evade our efforts and lives are devastated. The terrorist attacks of 2017 and Russia’s reckless use of a nerve agent in Salisbury in 2018 shook us all.

All of this strengthens our resolve to learn from what happened so we can be the best at what we do. That is why we jointly commissioned a review of the 2017 attacks, translated its findings into tangible plans, and have been delivering on those ever since. This has taken place under the independent oversight of Lord Anderson, QC, whose reports are publicly available.

The 2017 attacks in Manchester and London were carried out by individuals known to us and some who were unknown. Our staff have the constant challenge of finding those with terrorist intent before they act. They have to make professional judgments every day about which individuals, from among many thousands, to pursue with finite resources. They do so from fragments of unproven information and always without the full picture that 20:20 hindsight might bring. There is a premium on continuing to develop ways to tip the odds further in favour of detection.

Three key themes emerged from the review of the 2017 attacks: how we use data, the need for intelligence sharing at local level with other organisations, and the need to step up national efforts against other types of violent ideology such as the far right.

On data, we identified ways in which advances in that field enable us to sharpen our “radar” and increase insight. There is no magic solution but there are valuable gains to be made by going further in data analytics and related technologies with parts of the private sector. We have made important progress already. Used in combination with knowledge from our behavioural science experts, this will give us an earlier and richer picture of our cases. It could also help us spot more quickly when individuals known to us from the past re-engage with terrorism. We do not have the resources or legal justification to actively monitor those many thousands of individuals. The challenge we are addressing is how to detect signs of developing intent.

This relates to the second theme, of sharing more information at local level. A broader, multi-agency approach to managing the risk in communities posed by individuals linked to violent extremism can succeed where a more active, intrusive investigation might not. This means sharing intelligence with a wider range of partners than before, such as health and social services departments, to make use of local expertise. Several pilot projects are running with a view to introducing a national scheme. This approach has parallels with how the authorities manage the risk posed by sexual or violent offenders.

Islamist terrorism predominates by scale but we are also concerned about the growing threat from other forms of violent extremism — the third theme. Violent extremism covers a spectrum of hate-driven ideologies, including the extreme right and left. The police have been working hard to combat these threats, and over the past few years have stopped a number of right-wing terror attacks from getting through. Sadly, as the murders of Jo Cox, MP, in 2016 and Makram Ali outside Finsbury Park Mosque in 2017 demonstrated, as well as those in New Zealand, we have seen an increase in such forms of violent behaviour. MI5 has now joined the police in tackling the most serious end of the problem.

As we face up to the challenges ahead, we take confidence from the talent and dedication of our people and the strength of our partnership. In a changing and uncertain world, our commitment, with partner agencies, is to keep pushing forward, adapting and improving to face down shifting threats.

But we can’t succeed without the support and the help of the British public. Earlier this year, we launched our latest campaign to increase public vigilance and reporting about suspicious activity. Launching the campaign, the national operational policing lead for counter terrorism, Assistant Commissioner Neil Basu, announced that a large number of reports from the public had been helpful, and on many occasions attacks have been stopped and lives have been saved. We need to increase that level of vigilance and support even further. It is an old adage but a true one that communities defeat terrorism.

We are deeply grateful for that support; we never take it for granted. And we pay tribute to all those who work with us to help keep the country safe every day. They know who they are and they have our thanks.